” ‘Supposedly these two women got in a fight over a man up there in front of the church. One was the wife and the other was the girlfriend. The preacher heard one of them swear she was going to knock the other one stiff.’ “

A ghost town in the northeastern part of Ohio lie the stories of a forgotten few where if you were passing by on the local interstate you would blink and not even know they existed. If you were to take a wrong turn you may find yourself entertained at first but end up hoping you have enough gas in the tank to high-tail it the hell out of there. The majority of the Knockemstiff residents are resigned to their fate, the very few see endless possibilities outside the force field that keeps locals in and guests out. 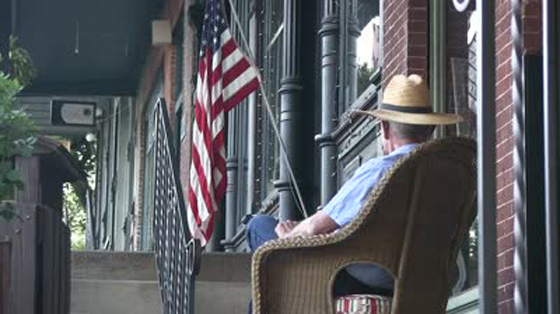 Some of the more optimistic stories highlight the importance in putting an end to a generation of abuse, misogyny, incompetence, violence, and bigotry. The first story gives you hope that during a long extending drought a son will change the course of his life’s predetermined expectations. After earning the love from his father he realizes that this foreign feeling is one that he has been longing for his whole life. That night a storm came and any potential change in relationship was fleeting. As you read on, the helplessness blues is really only possessed by the reader as life goes on for the players. Thoughts of love, happiness, belonging and opportunities are not enough to relieve the burden of addiction, compulsion, loneliness, sexuality, shame, and Knockemstiff itself.

“I wish I could’ve been the one, I really do, but I don’t figure I’ll ever leave the holler, not even for Tina. I’ve lived here all my life, like a toadstool stuck in a rotten log, never even wanting to go into town if I can keep from it.”

For good, bad, or indifferent, I will never forget my time reading this book and meeting these depraved characters. The author takes little time in undressing the town, leaving their citizens naked for the world to see with nothing to hide. All skeletons are out of the closet, and their bodies reveal more about the lives under focus than they would like to believe. Carnal desires, addiction to substances, basic daily nourishment are satiated with no respect paid to the bystanders in their way. This is the way of the city, the way of the world as they understand it, anyone that disagrees should hit the dirt road out or stay a while longer, either way shut up and get the hell out of their way.

From the mid sixties, the time of sex, drugs, and rock and roll to the late nineties and the evolution towards sexually transmitted diseases, fatal overdoses, and rap metal; the characters in this book trickle in and out of each other’s lives, age before our eyes, give way to their vices, while leaving a lasting impression. Some people, like myself in some cases, will feel nauseated, but that’s okay as it simply means that you have some sort of standard or moral composition, this is good. You may have to up the meditation practices to cleanse the mind, may need a hot shower to cleanse the body, and to take a long walk to be at one with nature to cleanse the spirit. This book, these stories, these characters, will most certainly push your buttons and will test your level of resolve as to how you believe the idea of humanity should be understood.

“The glass door swung open and two big, homely women walked in looking guilty. They were the kind of women who, out of sheer loneliness, end up doing kinky stuff with candy bars and wake up with apple fritters in their hair.”

The only time I have felt this uncomfortable was when I watched Harmony Korine’s independent film Gummo. The movie follows a group of lonely and downtrodden characters from Xenia, Ohio (which happens to be sixty-six miles north of Knockemstiff) while they carry on with their boring and nihilistic lives. The city still hasn’t recovered from a tornado that hit over twenty-five years ago and the tag line for the film states “prepare to visit a town you’d never want to call home.” One things for sure is that in both of these pieces of art, the characters are warped in their thoughts on morality, while also happening to undoubtedly be the genuine article. The author’s knowledge of this environment leaves little doubt to his breadth of understanding. He presents each account with an honest, evocative, poignant, and dark way that leaves an eternal stain on the soul that not even vinegar and baking soda could remove. This book is recommended to all the cement stomachs out there and lovers of new experiences. You’ve been warned.

“Daniel didn’t say anything. He figured the man had as much right to call himself a cowboy as the movie stars on TV. The trucker rattled on about the best way to build a campfire in the rain. It suddenly occurred to Daniel that out here on the road you could be any damn thing you wanted to be. You could make up a new life story for every stranger who offered you a ride. You could be a Boy Scout without a single badge, a millionaire without a pot to piss in, a cowboy without a horse.”