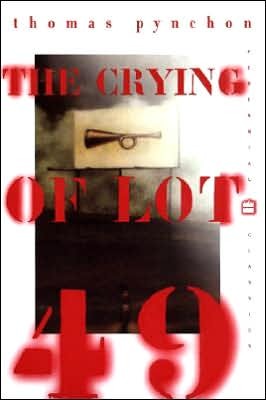 “Paranoid are not paranoid because they’re paranoid, but because they keep putting themselves, fucking idiots, deliberately into paranoid situations.”

In a post-modern world, in a town that on the surface is not unlike many others, there lives a woman named Oedipa Maas. She lives in a town that goes by the “rolls off the tongue” name Kinneret-Among-The-Pines, California. Dissimilar to any other typical morning, Oedipa wakes up to find out that she has recently been named an executrix of her one-time boyfriend and noted real estate tycoon, Pierce Inverarity’s estate. Initially shocked to find out that Pierce had died, she becomes flabbergasted to be even given such a responsibility considering the little time they courted and the few times they stayed in touch thereafter. Oedipa had moved on, found a new lover and husband in local radio disc jockey Wendell “Mucho” Maas, at this point she didn’t have time for games. After her subsequent meeting with the co-executor of the estate, Oedipa begins to realize that if she doesn’t do it, no one else will. She begins to settle his matters swiftly and with due respect by taking her role, however crazy it may seem, very seriously and with great honour. After finding out the numerous amounts of securities and holdings that Pierce had in corporations and properties, Oedipa gives her best effort to sort it all out. Slowly she begins to find that the people around her, the ones that she cares for are changing. Upon this realization she is beginning to uncover some mysterious symbols on bathroom walls, stamps, sidewalks and other places pertaining to a 17th century secret organization and their conflict with a fellow mail distribution company. Oedipa believes that she is part of an elaborate plot. The thought that her dead ex-boyfriend may be playing a nasty trick from the grave is very plausible given his vast financial resources and business contacts. In willingly playing the role of the pawn Oedipa has determined one of two things: 1) she may have unearthed a national conspiracy, or 2) she has gone bat-shit crazy. After reading this book, with no clear-cut answer, I tend to go with the latter, but whatever it is, she remains unphased and carries on.

“San Narciso was a name; an incident among our climatic records of dreams and what dreams became among our accumulated daylight, a moment’s squall-line or tornado’s touchdown among the higher, more continental solemnities—storm-systems of group suffering and need, prevailing winds of affluence. There was the true continuity, San Narciso had no boundaries. No one knew yet how to draw them. She had dedicated herself, weeks ago, to making sense of what Inverarity had left behind, never suspecting that the legacy was America.”

What makes this book interesting is that it takes a normal, yet shocking situation that most people have to deal with in life and couples it with a sub plot of psychiatric prescribed pharmaceuticals and the meeting of equally-effecting eccentric people. The story is simple, but the recipe is there for a wild ride that when it stops you still are not quite sure what the hell happened. A woman who has become increasingly aware of her surroundings has noticed that her once beloved city of Kinneret has become filled with terrorists, fanatics and crazies. A post modern mystery surrounding American history, conspiracy theories, hallucinatory drugs and paranoia. All of this is encountered for the sake of executing a past loved one’s last will and testament. The irony is amazing. What started off as an understandable situation, which ultimately demanded a mental inquisition ends up being a prolonged wild goose chase across city limits for a rare edition of a collection of plays and a secret underground world with its own rules, regulations and residents. With two passionate factions fighting for over three hundred years you would think it would be over the right to bear arms, instead they fight over the right to deliver mail. The losing organization establishes an Illuminati/Wizard of Oz-esque hidden reality complete with symbols and yellow brick road, leading wanting citizens to a unique society. Is this real life? Is she dreaming? Has the world gone completely crazy? Or, am I the one that’s gone completely bonkers? Yes, I believe it is safe to say that this book is a little bit different.

“Oedipa wondered whether, at the end of this (if it were supposed to end), she too might not be left with only compiled memories of clues, announcements, intimations, but never the central truth itself, which must somehow each time be too bright for her memory to hold; which must always blaze out, destroying its own message irreversibly, leaving an overexposed blank when the ordinary world came back.”

This is widely-regarded to be one of Thomas Pynchon’s more accessible books. Well outside of the continuous flow of colour commentary for acts within a revenge play called The Courier’s Tragedy along with other historical and machination musings I would agree. Unfortunately, attention paid towards the plot is few and far between, while the creativity of the writing and the lengths he’s willing to go seems like a primary objective. The author focuses more on the personality construct of the eccentric and complex characters, while forming their independent internal motivations and interesting environments for them to be situated rather than delivering a focused plot. I am assuming that this is a “thing” for the author. Zaniness does not bother me, what bothers me is the literary equivalent in partnership with the expectation of a certain mental acuity for time-travelling leaving me in a physical state of shock. Now I ask the author, which one of us is supposed to be on drugs or inebriated in some kind of way? Would a little drink help me understand? This novel was trying and demanded extreme attention which resulted in short spurts of reading in order to achieve any sort of retention, which essentially proved to be wishful thinking on my part.

I read and loved the author’s latest release Bleeding Edge which many of Pynchon’s most devoted admirers thought it was too cliché or had a profusion of cheap shtick. One thing even the man’s most hated reader couldn’t disagree with is that this man truly is an original. He displays a wide breadth of historical knowledge even if it’s not really all that important, cultural understanding even if he is not sensitive or politically correct, and a tendency to promote a counterculture environment built on question’s, for the most part in a non-threatening manner. I look forward to reading more from this author in the future, but I think it would be best for me and the author if I let this one breathe for a little while.

“There was nobody who could help her. Nobody in the world. They were all on something, mad, possible enemies, dead.”