“There were two points of view he was having troubles reconciling. From the first one, he was seeing himself as some sort of adventurer, who was following his instincts in his quest for something great, just not well defined. From the second one, he was morally bankrupt, irresponsible criminal, who was lying and stealing to get ahead and have fun.”

Victor has spent four years living the American dream of smoking weed, eating/delivering pizza, and accumulating $10,000 debt as an illegal immigrant in Cape Cod has bred jealousy and envy that social norms only the West can bring. His rather short stint has had a lasting impact, specifically a financial, psychological and spiritual toll. After being inspired by Barack Obama’s Presidential win in 2008, Victor made the decision to go to London to “change” the course of his life by pursuing International Relations at Amberton College in London. Victor was born in Sliven, Bulgaria to an abusive father, and a youthful, exuberant and free-spirited mother. For as long as he can remember he always wanted to live abroad in America. When he made the decision to live with his grandparents at sixteen due to his father’s drunkenness, his plan began to take shape. When he told his mother about his plan at eighteen she made the decision to hand over her life savings to help expedite the process. Four years later Victor has become an experienced liar, nonbeliever, lazy, and a man with many secrets. With all the trouble that seems to follow him he begins to think there is some invisible force that is playing tricks and having fun at his expense.

One of the issues I had with this novel was that the author’s focus was primarily on Victor’s paranoia and delusions of what others think,  when background information on his insecurities would have made him a more sympathetic figure and less crazy. With respect to his psychological manipulations, my advice for Victor would be for him to remember to smoke more indica strains of marijuana and stay away from the heavy sativa strains; it’s better to be happy than crazy and choice of weed may help curb dangerous thoughts. As it pertains to his low self-esteem, the problem was that you are never completely sure of what his low self-esteem is attributed to. Many people may think that it relates to his troubled upbringing but this is his chance to begin anew.  It can’t be because he is from a different country because the residence he is staying at in London is basically a United Nations conglomerate. It can’t be his habitual drug use because everyone he asks to partake doesn’t completely shun him. He eats a lot of spinach so I came to the conclusion that he often has some remnants left in his teeth and his flat mates don’t have the heart to tell him and go on there way without him. There is no rhyme or reason for the treatment he receives as far as I could determine. The author should have made it more apparent why he is treated the way he is treated, because with cultural acceptance in mind I just don’t see it. 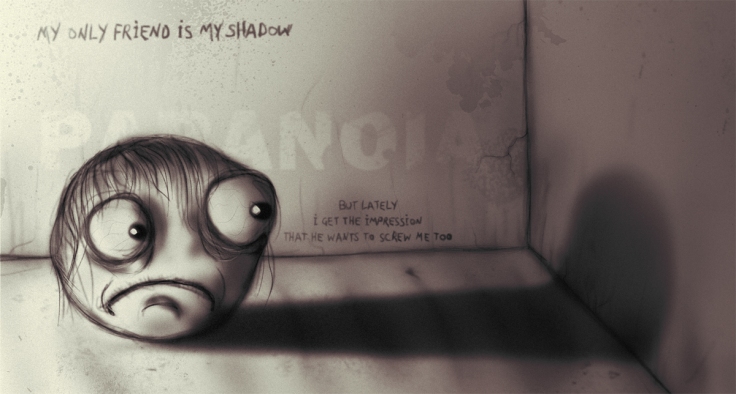 “Victor’s life was full of inexplicable twists and coincidences, and he often had the feeling that he was a pawn in the hands of something very powerful, whose nature he could never determine. Sometimes he thought it was sinister, sometimes he thought he didn’t deserve such a great guiding force.”

I don’t know if it was the author’s intention to interject a popular opinion of the American dream/way of life or to highlight the impressionable nature of the immigrant. If you understand the chain of events, Victor longs for America while in his childhood bedroom, when he arrives he spends his time smoking weed and being unmotivated by what he sees. When he decides to move to London for school he becomes more conscious of his future and decides that leaving America and enrolling would be the best choice for him. I feel Victor does whatever he can to fit in to his current environment whether it means smoking weed and delivering pizza or talking shop about current events and career prospects. Whatever happens to be the best method for him to meet people, he is willing to employ.

What I liked about this book was the narrative of feeling that you were looking at the scope of the world through the eyes of the lead character. The author does not spoon feed you a specific interpretation and many times I reacted to situations much like Victor because of the varying culture clashes encountered throughout the novel (who knew it wasn’t expected to tip a server in Europe).  Victor often finds himself confused or infatuated by wardrobe, eye contact, gratuities, non verbal cues, and lack of punctuality. If the author would have highlighted the varying cultural differences rather than one individual’s perception I believe the tone would have been a lot different. The title insinuates the mind of an immigrant but really the message dictates the mind of a man with mental peculiarities because everywhere he goes he is surrounded by travelers that are unlike him. The author plays to the old saying that “the eyes are the windows to the soul.” You get the feeling that from Victor’s rough upbringing he is so callused, that his potential for true happiness is a lost cause. This novel was a slow boil with a few disruptions along the way. It could have been a lot more compelling if the focus was executed more effectively together with a few more added dimensions. With all of that said I get the feeling that this novel will stay with me for a while.

For any film enthusiasts out there this book reminded me of a mash-up of movies. Take a good portion of L’Auberge Espagnole with a healthy mix of Shallow Grave and a sprinkle of The Terminal and you have yourself the book, In the Mind of an Immigrant by Stanislav Molokovski.

“Shivers started running through his spine as he had deja vu of previous intense and important moments when he had been finding himself doing nothing at the worst possible time. This was not the first time he was feeling confused and frustrated by this strange sense of powerlessness and he had a clear idea of what was awaiting him. It was panic, helplessness, anger, regret and more panic. He felt in an unmistakable way the presence of the invisible force that was playing with him again and was turning him into something pathetic and dysfunctional. He imagined one more day feeling this fucked and he got up, washed his face and saw the fear and anger in his eyes. He badly wanted this evil force to transform itself into an object, so he could smash it into pieces and then burn it, but none of the objects around him seemed to possess the characteristics of an evil force. He was terrified of the prospect of the evil force winning and a voice in his mind started repeating ‘not this time, not this time.‘”