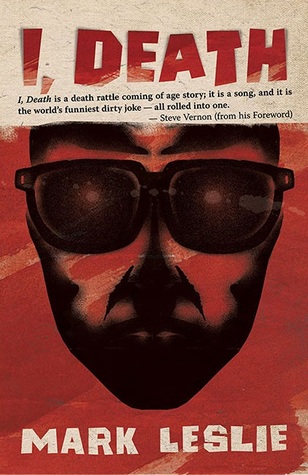 “No matter how much you run, no matter how hard you try, Death will find you and get what it wants. Death is the one thing that will not and can not be denied.”

Like most children there are times where you have insurmountable challenges trying to fit in with all the different cliques in high school outside of joining the yearbook committee. Some people stick to one individual group with like-minded individuals, while others like to embrace their inner fauna and utilize chameleon or social butterfly like attributes to blend in, spread their wings or find their inner selves. Be it Sudbury or Levack, Ontario,  high schools are not any different than any other high schools across North America or even the majority of the globe, except for this one thing afflicting this one young man.

Peter O’Mallick has been around death ever since he has been born. If you really want to nitpick, the reaper has been a presence before he was even granted entrance into the world. Scientifically speaking he was clinically dead in his mother’s womb, but somehow regained consciousness to only have his mother die during the delivery. Living with his father was the only realization about life he ever understood, so not having a mother seemed like a luxury he would never comprehend. At the age of seven, Peter’s life gets thrown upside down after his father is accidently ran over by a car in the family subdivision. Peter is distraught, heartbroken, and has feelings of guilt due to the fact that  the last experience he had with his father before he died was a period of disregard and an aspiration of death for his father. Now in his teenage years, Peter is back to some semblance of normalcy while living with his Uncle Bob and Aunt Shelley in Levack, Ontario. He has a small group of friends with varying personalities and physical differences, he has become a movie buff with the help of his Uncle Bob, and last but certainly not least, he has a girlfriend that he is crazy about named Sarah. Of course you wouldn’t think that a book called I,Death would allow things to go so swimmingly for our protagonist, for all the lovers of tragedy out there, rest assured it doesn’t. Slowly but surely, things again begin to unravel for Peter after his girlfriend Sarah breaks up with him, forcing Peter to look himself in the mirror and face his inner demons.

“I just got back from Sarah’s place. I snuck into the back yard, crept down by her window, just to, you know, peek in. There were plenty of times when we were dating that I would show up at the window and she’d stand on a chair, open up the window and the screen. We’d talk like that, her standing on the chair and me lying in the grass, sometimes holding hands through the window, through half of the night.”

There’s this place on the Internet, I believe it is referred to as the “blogosphere”. It is a place where people can talk about food, trade recipes, share their own personal art work, showcase their writing abilities, the places they’ve traveled, and the places they would like to travel. These are all great ideas for people all across the globe with shared enjoyments to trade their own ideas and testimonials. There also happens to be a realm in the blogosphere where people lie for the accumulation of things, cheat people for personal information, reveal their inner most thoughts, steal other people’s digital content, deceive for future exploitation, connive other followers into believing that what they are saying is 100% factual. It is a dangerous place out there in the dark vastness with all of its navigational complexities. The Internet can be a great resource for our own personal therapy, but it can also provide others with a key to our brain, and in turn our weaknesses,  as are leading man Peter O’Mallick soon finds out it is also easy to find and just as easy to find you.

“Couldn’t sleep last night, or the night before that – the morbid memory was stuck in my head all night and I still can’t get the image of Donnie out of my head. Every time I close my eyes he’s sitting in the dirt, his face leaking eye pus and gore, looking up at me, pleading. Just wanting me to help.”

I really didn’t enjoy my time reading this book. Between all the whining, all the lusting, all the angst, the postulations. all the sex; all the whiny, lusting, angst-ridden, postulating, sex there wasn’t much to this story beyond the blurb. The author takes some interesting plot points and finds the ability to soften the potential blows for the sake of over-the-top prototypical scenes focusing on immature mindsets. Remember Mr. Leslie you are only allowed one pelvic thrust per song on the dance floor, any more than that and things just get too creepy. I am most certainly not a prude, but this is the first time I have ever felt that the material didn’t fit correctly with the writing. While reading I typically enjoy highlighting some hard-hitting passages or beautifully written excerpts for later use, with this book  nothing grabbed my attention, by the middle of the novel I felt forced to find something to use. I hope other people will enjoy this story, but this simply was not for me and as much as I love life, death is not far behind, onward to other books.

“All day I waited for the sun to go down. Since it went down, I’ve still just been sitting here, waiting for it to come up. But I know that the sun coming up again won’t make a difference. It won’t change a God damned thing. Because I am finally beginning to understand what I am. I am death. And the death has to end. These nightmares I call ‘life’ have to end.”